Mr. Sam was born Sam Fallie in Memphis, TN. His family moved to Los Angeles (LA) CA while he was a small child, but relocated back to Memphis when he was 10. While living in LA, “Mr. Sam” discovered a love for music. From this discovery “Mr. Sam” joined his High School Choir and there he gained notoriety for his talent. After completing High School “Mr. Sam” formed several groups (Mellow Mystics, Naked Truth Band and Perfectionist) but all were short lived. Even though the groups were short lived something good did come out for “Mr. Sam” while performing with the group “Perfectionist”. The Legendary Great Late Allen Jones, Producer and Manager for the infamous “Bar-Kays” asked Mr. Sam to come aboard as a Staff Writer and he has been on his way ever since. 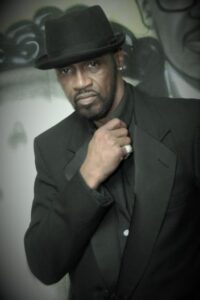 Mr. Sam’s writing abilities have been compared to such greats as “Homer Banks” and “Lionel Richie” and you will soon learn why. “Mr. Sam” has written several hits for the “Bar-Kays” such as: “What Goes In Da Club Stays In Da Club” featuring “George Clinton”, “Holla If You Like That”, “My Everythang” and “Lets Git Bizzy”, “J. Blackfoot”: “It Ain’t Over”, “I’m Just A Fool” featuring “Lenny Williams” and the remake with “Sir Charles Jones”, “Archie Love”: “Should Have Been There For You” and “Same Woman” featuring “J. Blackfoot”, “Theodis Ealey”: “Move With The Motion”, “Jerry L”.: “Girls In The Hood” and “Daily Love”, “Mr. Sam” also wrote “You Gon Make Me” and “Heartache” which won Southern Soul Artist “Lacee” (Best Female Artist of the Year 2006).

Since then Mr. Sam has joined up with a group with his childhood friends Tony Gentry, Neal Jones and Mr. Sam. The group was stardom for big things as they came out with a smoking CD entitled Roll It Roll It by Gentry Jones featuring Mr. Sam. The CD was outstanding and would have went platinum if the group could have stayed together long enjoy but when Roll It Roll It came out the gate as one of the hottest line dances to hit the team couldn’t hold it together.

With all good things when they break a part people move along and Mr. Sam had already started working on his own single project with Sweet Success Records entitled “SO FINE”. This new sound is more progressive and has more of an R&B / POP fell to reach a multi universal diverse audience. Multitalented both writer and singer with the ability crossing from one genre to another is the reason Mr. Sam has hit this new single out of the park.

why Mr. Sam is Mr. Sam is very much still very much independent just picking and choosing his projects as the spirits hits him. Sam is still writing and producing music for a multitude of artist in the recording field. For mor info on Sam visit his EPK at SOFINEMUSIC.com